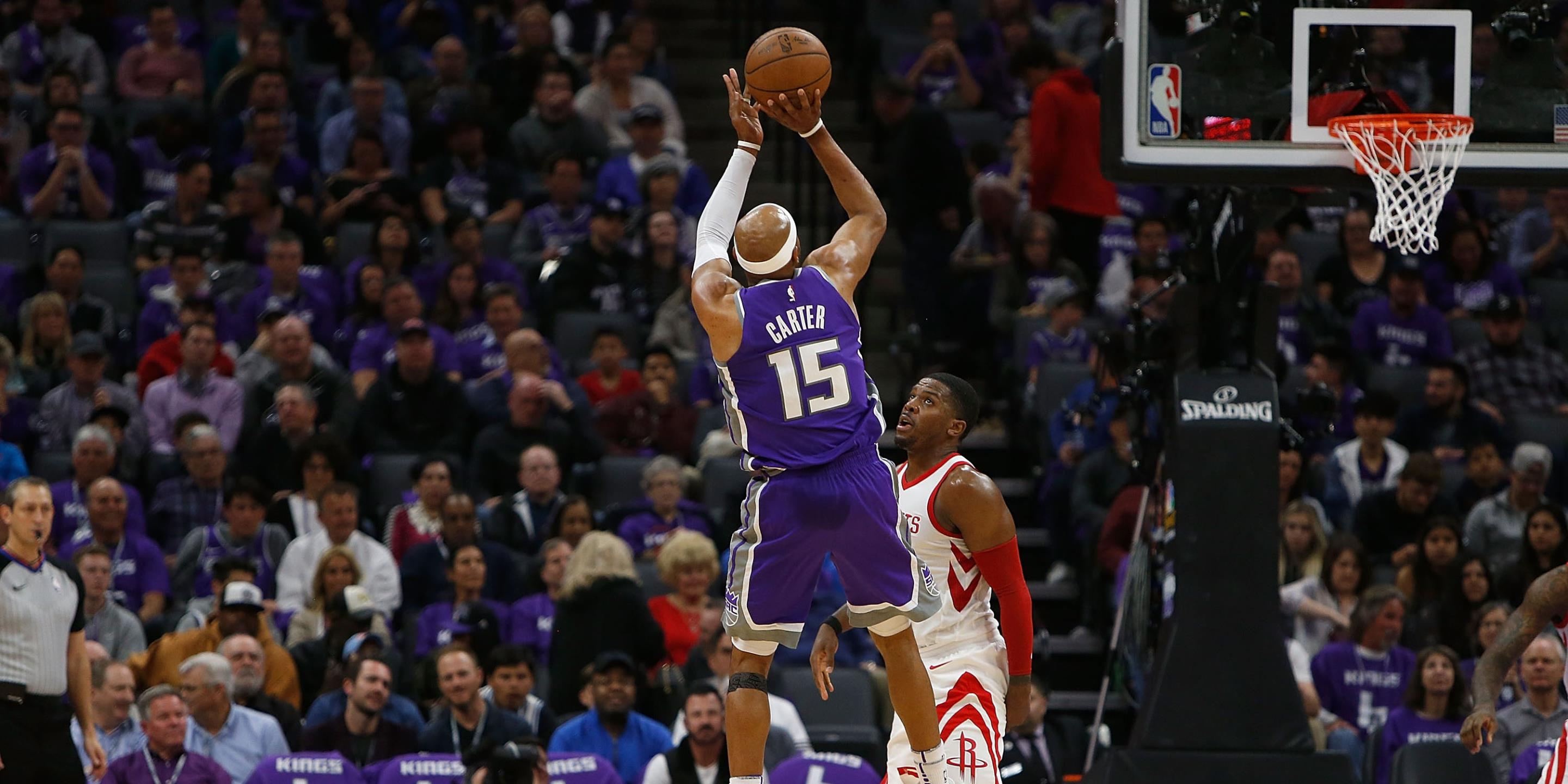 The NBA’s oldest player on stretches, pre-game meals, and more

Two decades into his basketball career, Vince Carter is between teams. But that’s not a sign that he’s ready to abandon the courts. As the oldest athlete in the NBA, he’s still making key shots, playing solid defense, and mentoring rookies.

Most fans know Carter for his high-flying athleticism and brag-worthy slam dunks. The fact that he’s played every season since 1998 proves his willingness in recent years to adjust his fitness, nutrition, and recovery strategies so he can keep competing with the best.

After spending last season with the Sacramento Kings and the previous three years with the Memphis Grizzlies, Carter expects to join a roster for the 2018 to 2019 season. With that intent he continues to train, using both the court and his at-home gym to maintain strength in the offseason.

Furthermore caught up with him about how he’s staying fit in his 40s and how he’s edited and refined his routine to keep his body in game shape.

The Training Regimen: Now that I’m older, I’ve changed my offseason routine a little bit. My workouts aren’t as long as they used to be and I don’t use as much weight, but I still exercise four or five days per week. When the season ends, I focus on maintaining my weight, biking and golfing to stay active, doing light movement and lifts, and keeping my core strong to prevent injury. I don’t play as much pickup basketball as I used to because I try to save some of the tread on this tire for the real thing.

I built an at-home gym, complete with two benches, weights, a treadmill, and recovery machines. As the summer goes on, I’ll take my body through a progression, adding more on-court work and more weight to my lifts. By the end of September, my body feels ready to play. During the season, it’s all about holding onto the strength I built in my off months.

Since I’m much older than most pros in the NBA, I need more time to get my body running like I need it to. On game days, I always get to the arena at least a few hours early to move through my stretches. I don’t do anything complicated, but I make sure I don’t stop until my legs feel limber. When you’re in your 20s, you can just go as you please—do a quick, light stretch, then walk out on the court. Not anymore. That’s been the toughest adjustment for me as I age, and stretching is a key reason why I’m still able to play.

Things have changed a lot training-wise since I came into the league. The biggest difference is all the new technology for tracking how much you run and eat, and the access players have to data in the gym. To learn and evolve, you have to be willing to try new things and embrace new technology in your training.

The Nutrition Regimen: I can’t indulge in sugar and fried foods like I did when I was younger. My diet might not work for the next 40-year-old, but it works for me. It’s full of vegetables, clean protein, and healthy carbs.

I’m big on pasta for pre-game meals because it gives me energy to burn through all four quarters. Sometimes I add chicken or another protein. When I don’t eat pasta, I can really feel the difference in the middle of a game when I need that extra energy and it’s not there. I try to eat as many vegetables and greens as I can, drink a lot of water every day, and stay away from soda and other sugary drinks.

If there are times I want to eat a burger or cheat, I’ll compromise and have it without the bun. You have to commit yourself to healthy nutrition, but there’s no such thing as a perfect eater.

The Regeneration Regimen: I use my cryotherapy machine a lot, go into hot and cold tubs, and ice my knees. Sometimes I actually like to lift after games. Whether I play big minutes or not, weight training helps me stay at peak level so I can compete against these 21-year-old guys.

I always stretch pre- and post-workout, before bed and after waking up, and on rest days when I’m on the road. Even short sessions make a big difference. Sometimes five minutes doesn’t seem like a lot, but the more I do it, the more of an impact it has.

Over the years, I’ve had to pay more attention to my body and listen to it when I’m feeling any soreness or pain. As much as you need to get your workouts in, some days the body isn’t willing to cooperate at this age. I’ll wake up in the morning with pain somewhere and I won’t know how or why. The next day, it goes away. It’s about knowing your limits and being smart about recovery.

What’s Next: I definitely plan on playing another season. I love the game and part of being able to keep going comes from my commitment to training and recovery throughout the year.