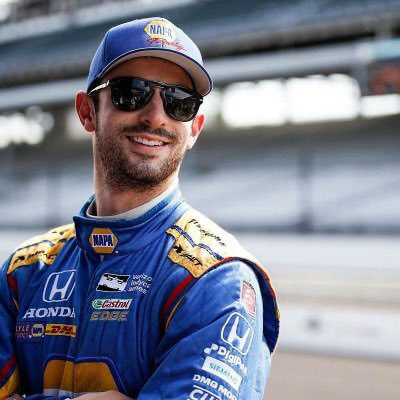 Imagine feeling the force of four to six times your bodyweight pushing against you as you navigate a racecar around 12 to 17 corners per lap—70 times—for two and a half hours. That’s the physical battle professional racecar driver Alexander Rossi is up against every time he competes. “It's a very aggressive environment,” he says in the video below. “It's one of the more demanding things that your body will go through.” To prepare his body—and mind—for the challenges of the track, he trains six days a week. Each morning starts with some form of cardio. His second workout of the day is either a dynamic strength routine with kettlebells and barbells or a racing-specific strength workout utilizing special equipment at the performance center in Indianapolis.

These are the five key elements of fitness one needs to compete at the highest level of the sport, according to Rossi:

1. Neck strength and range of motion

With a four- to five-pound helmet plus the g-forces plus the weight of your head, that’s almost 40 pounds of weight on your neck as you go around corners, says Rossi. “Your neck has to be, not only strong, but quite dynamic in terms of the range of motion that it has.”

Of course Rossi trains both legs but he needs a powerful left leg to pump the brake. “The brake pedal is basically a pressure plate and when you're decelerating as quickly as we do, you actually have an explosive movement onto the brake pedal.” To train for this he prioritizes plyometrics and isometric lower-body moves like the pistol squat.

“There’s no power steering so a lot of the strength to turn the car comes from your shoulders and your chest,” says Rossi. Your back must be strong as well as you're in a seated, almost laid-down position that puts a lot of stress on your lower back.

“Your heart rate is at 150 to 175 for the entire two and a half hours, and that's for two reasons. One, you already have a higher heart rate than resting because of the anxiety of what you're doing. There's a lot of adrenaline that goes with driving 240 miles an hour. And then the second part of that is because it's such a mental sport, your brain requires a lot of oxygen and blood flow and that's raising your heart rate as well,” Rossi explains. In addition to rowing, he brings his bike to the racetrack and he also runs it. “We walk the track on a Thursday before races (to ensure there aren’t any developments or changes to the track before we go out and drive) so you can turn the walk into a four- or five-mile run,” he says.

Rossi practices one common sports psych technique: visualization. “When you're driving the race car, you're operating in a subconscious state; because the speeds are so high, if you're consciously thinking through every action that you're doing, you're going to be one step behind all of the time,” says Rossi. “If you practice visualizing that lap that you're trying to do going into a race, when you actually get out there and you get into what people call a ‘zone,’ it comes much more fluidly and naturally if you've rehearsed it in your mind a little bit.”

The right way to train your rotator cuffBody

Your new warm-up should include these 9 moves.