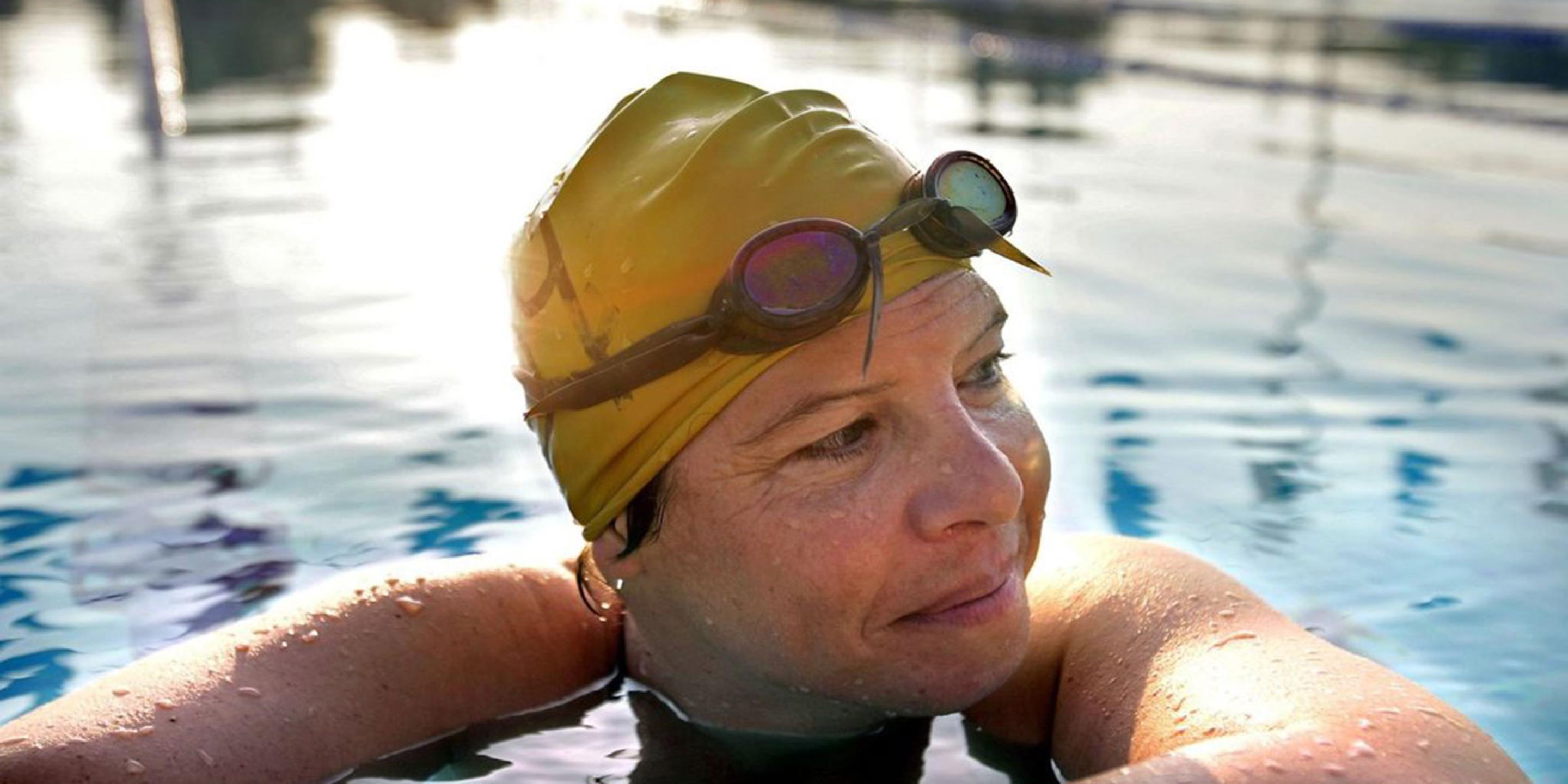 These athletes prove that it’s never too late to get serious about sports.

You’ve seen plenty of photos of Tiger Woods as a toddler holding a putter, or the elementary-aged Williams sisters on the court. But not everyone finds his or her athletic calling before hitting double-digits. In fact, some athletes find not just joy but success in sports later in life. These four phenoms—a weightlifter, a runner, an obstacle racer, and a marathon swimmer—are putting up performances that younger athletes envy.

Major accomplishments:Just four years ago, Chua signed up for her first-ever road race, a 10K, at the suggestion of a coworker. Previously, she’d jogged a bit in college but gave up when she got shin splints. “In 2012, my husband and I had just bought a treadmill and it gave me the opportunity to train and lose the baby weight,” she says. Fast forward to October 2016 when Chua ran the Chicago Marathon at age 40 in 2:58:26, good for fifth in her age group in one of the World Marathon Majors. She also won first female in the 2016 Queens Marathon, finished second overall female in the 2016 New York Road Runners (NYRR) Queens 10K, and was nominated for NYRR Runner of the Year in 2014, 2015, and 2016. In addition to continuing to achieve as a runner, Chua is organizing the Movin’ for Miriya 5K race to raise money to research Loeys-Dietz Syndrome, a genetic connective-tissue disorder that her oldest daughter has, which prevents the her from being able to run.

Training plan:As Chua focuses mainly on marathons, having completed four a year for the last two years, she logs a lot of mileage. “Inspired by the ‘No Days Off’ campaign, I’ve been running consecutively now since the beginning of the year,” she says. “So even on my off day, I try to do at least one mile, even if it the slowest mile.” She also includes two speed sessions and one long run a week.

Words of wisdom: “Joining a club or team is necessary to get an edge, to get the training, and to give you the community and support you need to improve,” she says. “Also, register for races and train for those goal races. The race is the test of your training, and you really won't know the degree of your improvement unless you have that test.”

Major accomplishments:After a brief stint with CrossFit which introduced her to weightlifting, Chamberlin decided to focus exclusively on Olympic lifting. A novice to the sport at age 47, she quickly made a name for herself in the 75 and 75+ kilo weight classes. She won first place in her age group at the 2013, 2014, 2015, and 2017 Masters National Championships as well as at the 2013 through 2016 Masters Pan Am Championships. Her proudest moment came in 2014: “I made a 63-kilogram snatch in a competition that would have been a world record if the right level of referees has been present,” she says. “Just the fact that I made a lift of world-record quality is amazing to me.” Now competing in the 69-kilo weight class, she hopes to achieve similar success—specifically, a total of 134 kilograms (or more) for the two lifts, which she accomplished as a 75-kilo lifter.

Training plan: Three to four days a week she focuses on her lifts. She does one day of cross-training and one full day of rest, with the remaining day open for rest or for low-impact active recovery, such as yoga or swimming. “Shoulder surgery in 2015 taught me that you can't take being injury-free for granted and you need to train smart,” she says. Older athletes need a balance of the types of training we do to ensure we remain fit in all areas. I like to think of it as keeping me ‘play proof’: I want to be able to go skiing, hiking, ice skating or any other fun activity without worry of getting injured.”

Words of wisdom: “It’s never too late to try,” she says. “I never touched a barbell before age 47 and now I'm a competitive athlete who travels the world.”

Major accomplishments:As a kid, Wilson swam competitively in the pool, but stopped after high school to attend a music conservatory. Though she kept up swimming for exercise, she bored of the pool and at age 34 signed up for a 12-mile circumnavigation of Key West, her first of many marathon events. These long-distance, open-water swims start at 10,000 meters (that’s 10 kilometers, or 6.2 miles) and go much much longer. “Swimming all night is not uncommon in this sport,” she says. Also unique: the finishing time is secondary to the accomplishment of swimming many miles. “Two comparable swimmers can swim the same distance a day apart and have completely different conditions, thus vastly different times, and we understand that,” she explains. Among her impressive accomplishments include crossing the 28-mile Molokai Channel in 20 hours and 52 minutes, her most difficult ever thanks to rough ocean currents and dozens of jellyfish stings. She’s also swam around the island of Manhattan (28 miles) and across the English Channel (21 miles), and at age 51 won the women’s division of Grand Forks, North Dakota’s Red River Swim (36 miles), placing third overall.

Training plan:Swimming, swimming, and more swimming. When prepping for a race, she opts to do the bulk of her distance in the pool on the weekdays, with an outdoor swim on the weekend to both acclimate to cold water and train with the elements. “Each marathon swimmer crafts a training schedule to fit lifestyle and ability,” she says. “Some swimmers will swim a couple of times during the week and then do a long multi-hour training swim on one or both weekend days.” She also spends some time training in the weight room. She’s currently spending a bit less time in the water as she focuses on the SwimCalm program, a teaching method she created to help adults overcome fear of the water and grows the Swim Around Charleston 12-mile annual event she started in 2011.

Words of wisdom: “Always take the time to learn the ins and outs of any sport,” she says. “Find a quality mentor with a track record to guide you. Don't be in a hurry to achieve the highest level in the sport; it’s more fun to enjoy the ride and work as you are comfortable.”

Major accomplishments: McDaniel’s son, Brian (already a Spartan athlete), signed his father up for his first Spartan Race, the Austin Sprint in May 2012, as a Christmas present. Since then, the former recreational runner has done 16 Spartan races, finishing first in his age division in all but two of them, including three in 2014 post-knee surgery for a torn meniscus. He’s proudest, though, of the races in which he finishes without having to do burpees (the penalty for missing an obstacle). “Any race when I can hit the spear throw is a major accomplishment,” he adds. His future goal is to complete an Ultra Beast, Spartan’s marathon, at 26-plus miles long with 60 or more obstacles.

Training plan:McDaniel works out all year, making adjustments as dictated by nagging knee and back issues. ”It would be too difficult for me to take time off, then try to get back to a reasonable condition to race,” he says. So, he runs two to three days per week, and focuses on core and grip strength in the gym as those are particularly important for completing the various climbing, crawling, and hauling obstacles. He’s subsequently become a Spartan coach to help others conquer the races.

Words of wisdom: “If I can do it, you can do it,” says McDaniel. "If you need a support mechanism, get a family member or friend to join you. If you need help getting off the couch, get a coach.”