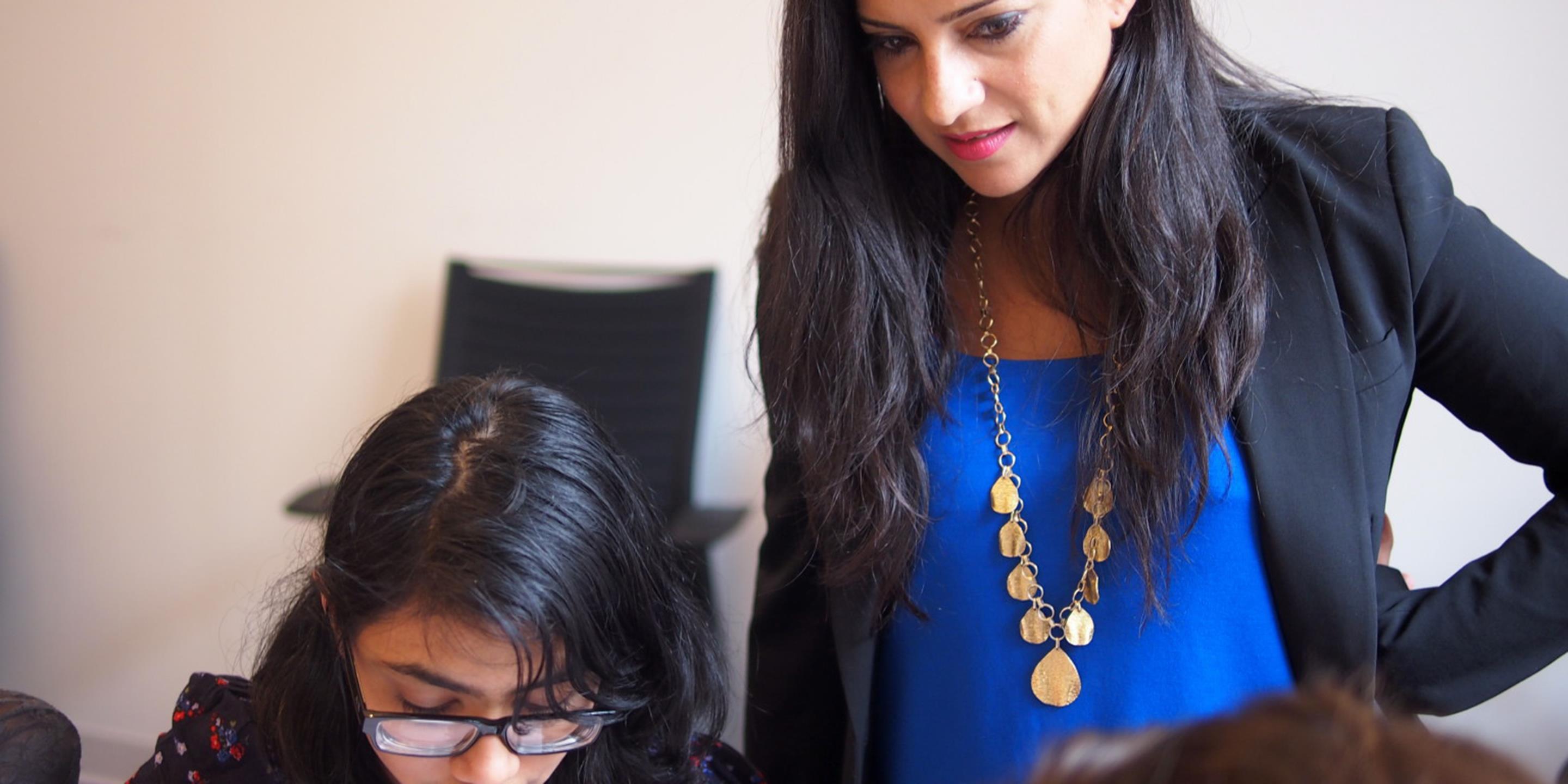 By immersing young females in the world of computer science, Reshma Saujani is changing lives and strengthening technology in the process.

In every field there are game changers. The Michael Jordans, the Apples, and now, the Warby Parkers. Led by co-founders Neil Blumenthal and David Gilboa, Warby Parker is forever altering the way people think about buying glasses and giving back. Inspired by their work, we partnered with WP to recognize other outstanding socially conscious organizations in our second annual Visionaries Series. These are the innovators who aretangibly changing our world for the better.Check back weekly to meet the complete Class of 2013. May the way they see the world inspire you to do your part this season.
The Person: Reshma Saujani

The Business: "Girls Who Code is a non-profit organization with a mission to close the gender gap in technology and prepare young women for the jobs of the future. Today, women are more than half our workforce but hold just 25% of the jobs in computing and technical fields, and that divide is only going to get bigger if we don't do something about it. There's a huge pipeline problem: only 12% of computer science graduates in the country are women. With more and more jobs being created in the computing fields—1.4 million of them by 2020—leaving our girls behind just can't be an option. That's why Girls Who Code is building a movement to expose girls to computer science, equip them to pursue majors and careers in this field, and inspire them to use their knowledge to change the world."

The Idea: "I got the idea for Girls Who Code when I was running for Congress in 2010 in New York City. The District where I was running included some of the poorest zip codes in the country and some of the wealthiest, so in a single afternoon on the campaign trail I would meet kids who had every gadget imaginable and kids in other neighborhoods with no access to a computer or a teacher to show them how to use it. As someone who is passionate about policy, I was just stunned by the fact that as our tech sector grows and our economy changes faster and faster, entire populations could lose out. I became convinced, and am even more convinced every day, that teaching girls to code is the domestic issue of our time.

The Impact: "On a macro level, 100% of our 2012 program participants reported that they are definitely or more likely to major in computer science following the program. When only .3% of high school girls nationally are selecting CS as a major, that's a meaningful impact. On a micro level, every girl has a powerful story, but Julia's always sticks out to me. She came from a family that was struggling to put food on the table, and her father was working as a substitute custodian. She had never been exposed to computer science, but a librarian at her school encouraged her to apply to Girls Who Code. Not only was she a brilliant coder, but she went home after class every day and started teaching her father what she was learning. Now, he is taking adult coding classes and on his way to working as a computer programmer. That's the power of what Girls Who Code is doing."

The Inspiration: "I bound out of bed in the morning thinking about how to scale Girls Who Code to reach more girls. I'm obsessed with building this movement."

The Surprise: "The girls themselves! When we first launched with our inaugural class of 20 girls, we had no idea how successful the program would be. But by the end of 8 weeks, we had 15 and 16 year old girls building products to help their families and communities. One girl built a mobile app to help homeless youth find shelter. Last summer, I sat at a conference table and watched our girls pitch Facebook apps they had created... to Sheryl Sandberg! They surprise me every day."

The X-Factor: "Technology companies want to hire women. Women make the majority of consumer purchases, post on Facebook more, Tweet more, but aren't working in technology. It's very simple: we can't out-innovate unless the people who are using our products are building our products. Girls Who Code is addressing a problem that a lot of people have an interest in solving."

The Future: "Girls Who Code is aiming to reach a million girls by 2020, and we're thinking big. I envision a Girls Who Code club at every public library, in every school, in every community center. I want every girl from the prom queen to the bookworm to have access to this skill set and confidence in their ability to succeed in it."

The Visionary in Her Eyes: "Hillary Clinton is a visionary in my eyes because she's not afraid to focus on women and girls. At home and abroad, she's always looking to lift up women and create opportunities for them."

The Message: "Fail fast, fail hard, and fail often. If you haven't failed yet, you haven't tried anything."