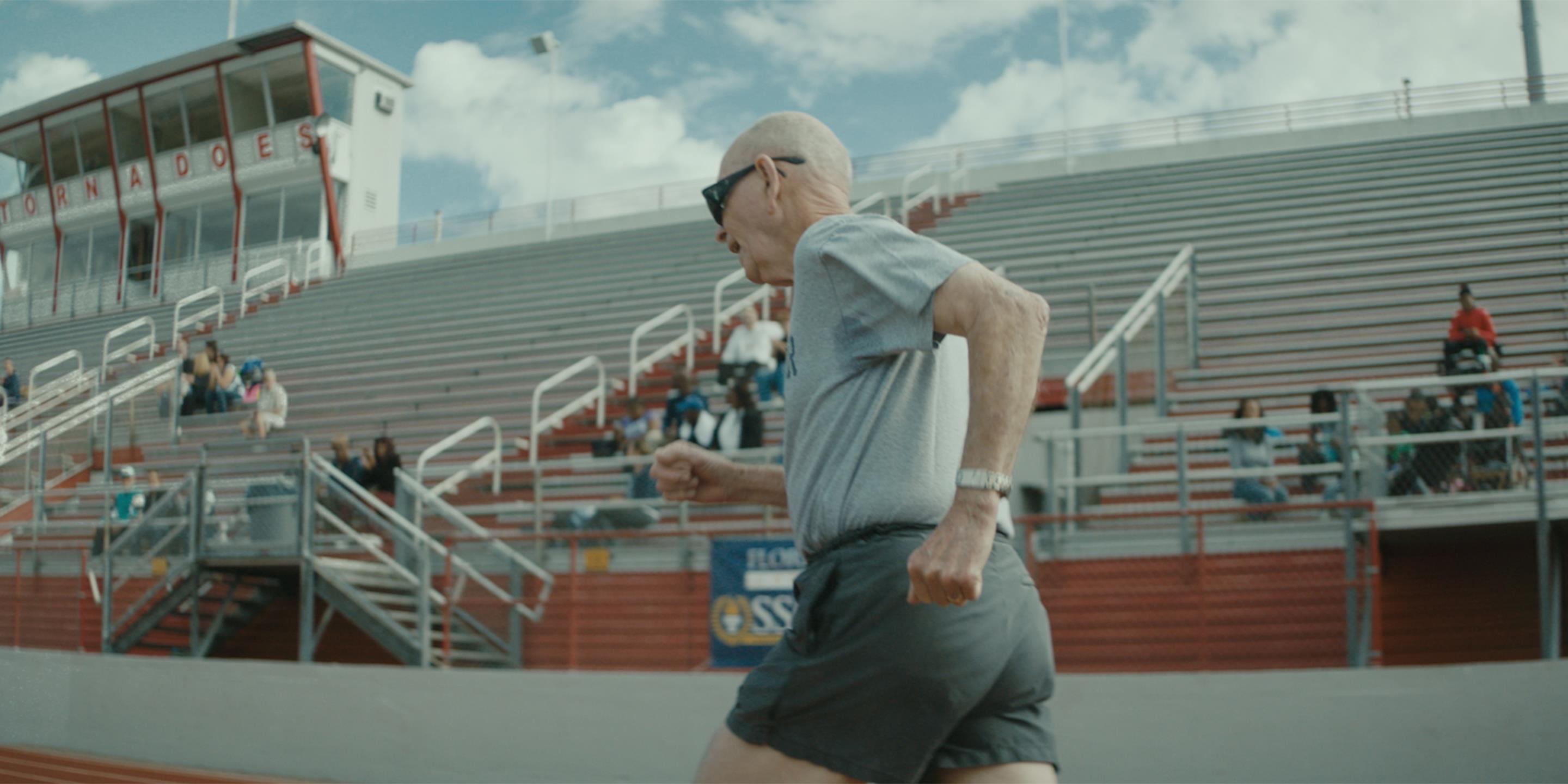 For these ageless athletes, it’s all about the long game.

Aging is not the enemy. Botox be damned, our bodies are designed to grow older—it’s a biological imperative. And while some write off aging as physical decline, depending on your mindset, the later years of life can actually be the most active. Those of us who never set foot on a track or stepped onto a basketball court may be athletes-in-waiting, competitors who just haven’t embraced competition, yet.

For proof, look no further than the thousands of athletes who, every year, come from their respective cities and counties to compete in dozens of sports at the Florida Senior Games. In states across the U.S., the 50-plus demographic vies not just for local titles, but for coveted qualifier spots at the biennial National Senior Games, an Olympics of sorts. The caveat: These athletes have a few more miles in their rearview (and fewer endorsement deals) than the Final Five or Michael Phelps.

In recent years, our culture has had a fitness consciousness raising, and the senior population is no exception. “Folks have started to realize that living an active and healthy life makes them feel better in a variety of ways as they advance in age,” says Stephen Rodriguez, senior vice president of the Florida Sports Foundation.

“Seniors definitely make up a decent percentage of my clientele,” says L.A.-based Tier X coach Zamia Cohen. “To date, my oldest client started with me when he was 79 years old, and he hadn’t exercised in 20 years.” At the Florida State Games, men still outnumber women about 2 to 1, but there is a slow-but-steady evening out across genders. “Athletes that are now reaching the Games have grown up in atmospheres more friendly towards female participants,” says Rodriguez. “We have several women who are now in their early- to mid-60s who were pioneers in women’s collegiate athletics after the passing of Title IX.”


But the arena exists as a social circle, too; competitors return year over year, becoming fixtures, forming communities and forging bonds based on a shared love of movement. “Many athletes tell me they enjoy traveling around to various events just to see others with who they have developed friendships over the years,” says Rodriguez.

I also love the fact that the senior athletes, who spent a lifetime encouraging their own children in sports, now are being encouraged in competition by these same children.

To skeptics, it may sound impossible—octogenarians, pole-vaulting and power lifting? Physically, “the age specifically isn't often the challenge,” says Cohen. Training as a senior may mean a higher likelihood of medical and orthopedic issues. And, generally speaking, if they have never exercised before, “their base is quite a bit lower and their progression is generally slower and probably not quite as intense,” says Cohen. “But that is by no means a rule or a given.”

As with any person approaching a regimen, what matters more is mindset. And in that category, these athletes are peerless. “One thing that is great about an older population is they don't tend to care what other people in the gym think so they will do whatever, even if they think it feels or looks silly or weird,” she says. “They have the confidence to choose purposeful movements that will help them reach their goals.”

On his fitness routine:“The mailbox is about one hundred meters from the house so I don’t walk to the mailbox. I run. I just love to run. We have an elliptical and I’m using that as much as I can. We also go dancing once a week.”

On unplugging:“I kind of get mad at myself once in a while for spending as much time as I do on the computer. I’m not really that interested in it but I’ve got emails to answer and things to look up, and so I’m sitting there at that computer thinking that I could be out in the street running.”

On her fitness routine:“I get up in the morning and stretch the body for fifteen minutes. Instead of getting up or staying in bed, I stretch. So I do that for fifteen to twenty minutes every day, no question.”

On how they met:Norman: “I was in the Army and on a regimental baseball team, she worked at the post exchange, which is like a department store for the military. When I played she would come over and watch, and I liked the way she watched.”

Misako: “I would take 15 minutes to go watch baseball. And he’s a talker.” 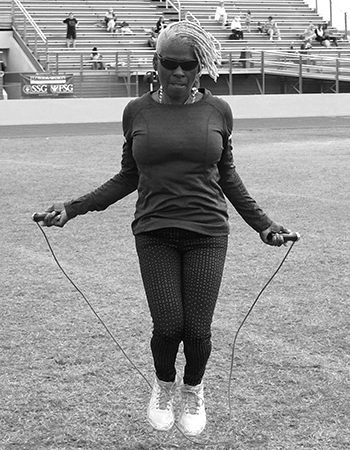 How she chose her sport: “I checked the 100-meter race. I had no knowledge of what was going on. I thought, it’s less than 200 meters so it might be easier for me to do. My friend said to me “JoAnn, you picked the hardest race, you have to run that race in seconds!”

On listening to yourself:“When I first saw the list of events [back in November 2002], I said to myself, ‘Oh my god, I’ve never done any of this!’ A voice said to me, ‘You can do this.’ So, I’ve learned to listen to the soft voice now that speaks to you because that voice normally be the right voice to listen to.”

What won’t stop him:“A year before I got into senior sports I had to have a pacemaker put in. My cardiologist told me to do everything I had done before and to not change my lifestyle at all. So I made these pacemaker guards that I wear under my basketball uniform. I have a child’s soccer shin pad that’s attached to a neoprene shoulder brace. If I take a ball to the chest, it’s designed to spread the shock out.”

His secret weapon: Training young.“I play three times each week at my local Y with a group of guys mostly in their twenties and thirties. And then when I go and play against people in their seventies, I’m thankful, because I’m usually in better shape.” 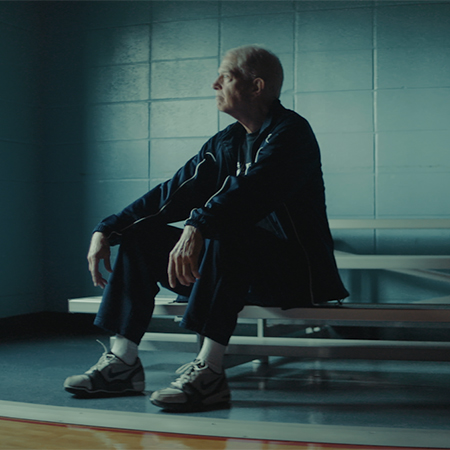 On racing:“This race is about strategy and guts. For me, it was about guts to stay up front. Because the only thing that counts is who finishes first. And if you’re drafting behind someone the entire way, then you’ve saved up your energy [to sprint to the finish]. For my age, there isn’t a whole bunch that want to do it because it can be kind of dangerous.”

On recovery:“Maybe every two or three weeks, I will take one day off. I really don’t like to take a day off, but I know I have to.”

How they began: Eric: “We’re multi-event people. I’ve been doing it for twenty years, she’s two-and-a-half years younger than me, so I think she’s either eighteen or seventeen.”

Eric: “We met at a dance club in Daytona Beach. It used to be the Marriott Hotel, the Waves dance club, and she had great-looking legs.”

The couple who competes together…Susan: “It helps having someone behind you and saying ‘Ok, you missed this one but you can get the next one.’ It just gives you a lot of encouragement."

Eric: “The training is where the big thing is. Somedays I don’t feel like training because my knee hurts, and she goes so I’ll go with her. It’s really nice.” 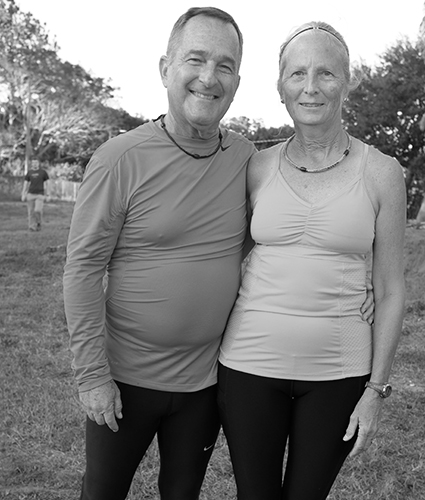