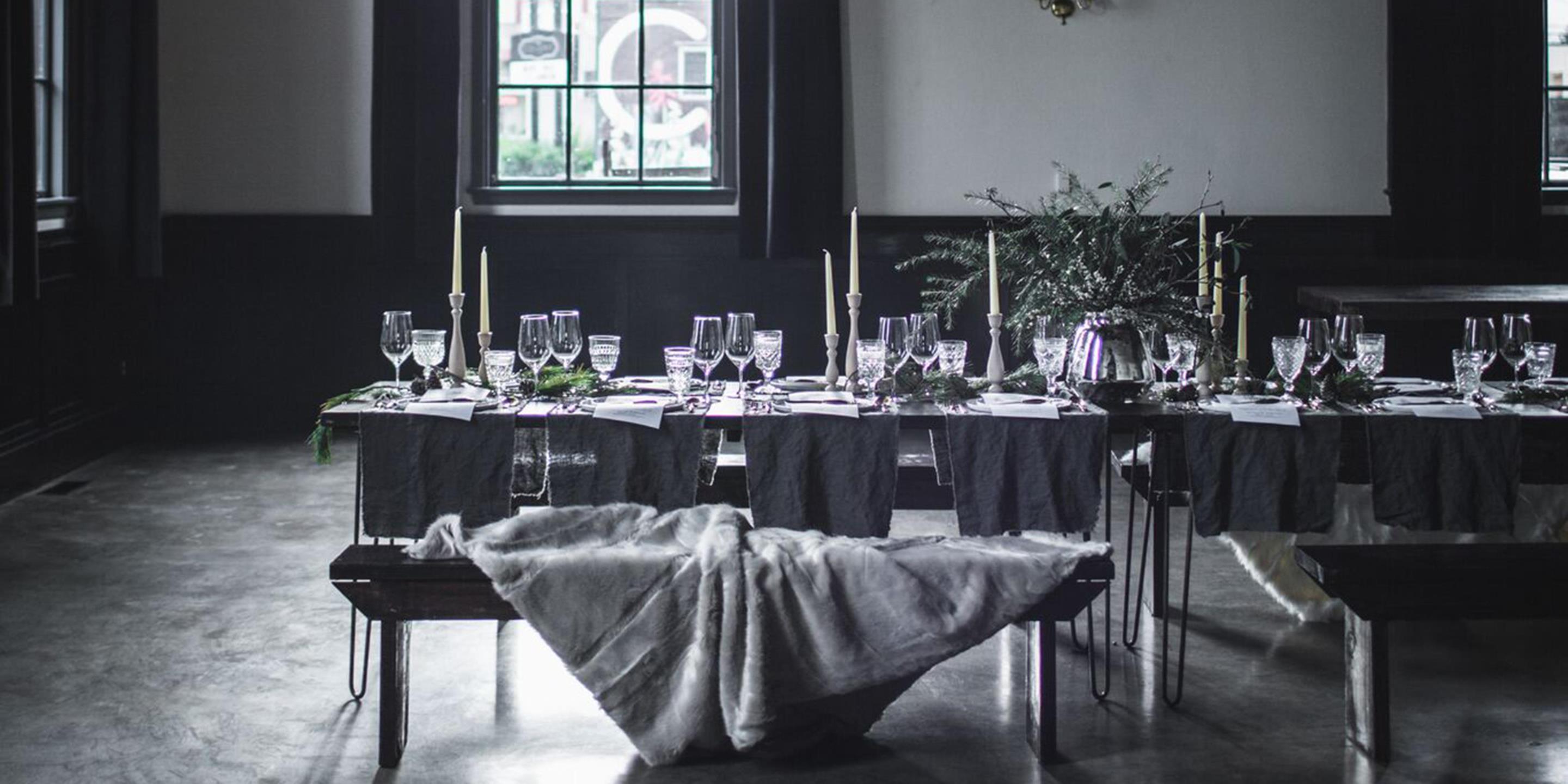 The invitation is the new reservation.

Dinner parties are having a moment. High-performing bodies who have sought after coveted restaurant reservations, only to be rushed through a meal, now desire something different. And in a world where elevated eating can be accessed via devices at our fingertips and delivery to our doorsteps, finding the extraordinary becomes that much more of a challenge.

In the past, underground eateries were reserved for gastronomes and food insiders. The secret dinner party brings this vibe into the mainstream, promising to change the way we interact with the food, the surroundings, and the people involved. For Portland-based event series Secret Suppers, the core approach is to offer dinner parties that surprise the guests. Below, host Danielle Firle gives us a glimpse into one of their signature secret suppers, which paired Scandinavian food with the majestic and lush scenery of their beloved Pacific Northwest. Read on.

What is the concept behind the secret supper club?

It is a pop-up dinner series. Pop-up dinners are popular throughout the U.S. but are trending specifically in the Northwest. It’s a new way to get people out of the typical restaurant environment, and maybe connecting more (in our case at least) with the food, the people around them, and with the environment, as most of the dinners are held outside. We try to bring all those pieces together in each of our dinners.

So, could we say that they spur from the need of a more human connection when dinning?

Indeed. To me it’s a little bit more community-minded because we do a long table and serve most of the courses family-style. It all feels much more community-based. This is more fun than just going to a restaurant with the people you came with because you get to meet new people.

But why the secret element to it?

That’s the fun of it. The main purpose of the secret of the suppers is to add a little bit more intrigue and make it more fun for our guests. They don’t know what they’re getting into. We give them ideas of what they can expect, but they don’t really know too many details. With the location, for example, we are very secretive. A month out we give some lodging recommendations, if it’s far away. We tell them a general city, but they don’t find out where they’re going until twenty-four hours before the supper. That’s when we send them the address. When they come in, all they know is the theme of the dinner, but they don’t know the menu, the wine, or anything like that. For the most part they’re coming in kind of blind to the supper. This adds an extra “wow” factor. It surprises them and that’s exactly what we want.

We want people to be very intentional about eating very thoughtfully, and purposely try to slow the guests and pause things. We have a long cocktail-and-appetizers hour that usually lasts forty-five minutes to an hour depending on the vibe of the group. Sometimes people feel ready to sit down before, and sometimes people want to hang out for a while. Then we sit and with the next four courses, we try to take about a half an hour in between each. We do let people know that upfront; that we will be intentionally serving them slowly so that they can take time to talk and really see their food and their surroundings. We definitely don’t want people to feel rushed. We also purposely try not to pull dishes off people until almost everyone is done eating, for example. We are so used to that here in the U.S. 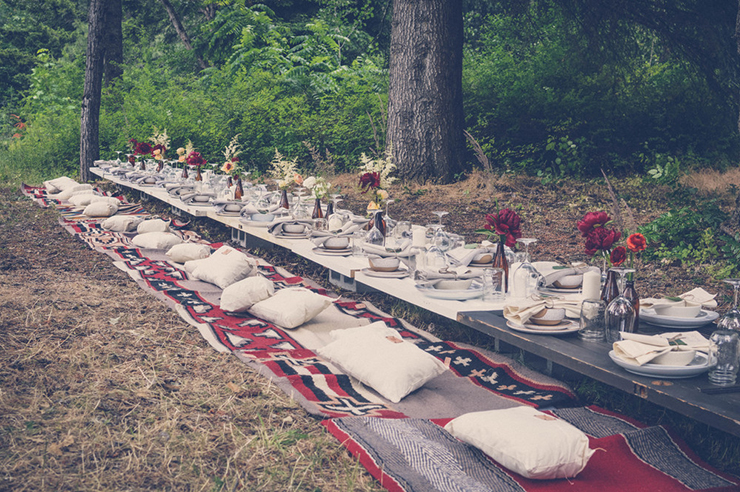 "We do let people know that upfront; that we will be intentionally serving them slowly so that they can take time to talk and really see their food and their surroundings. We definitely don’t want people to feel rushed." 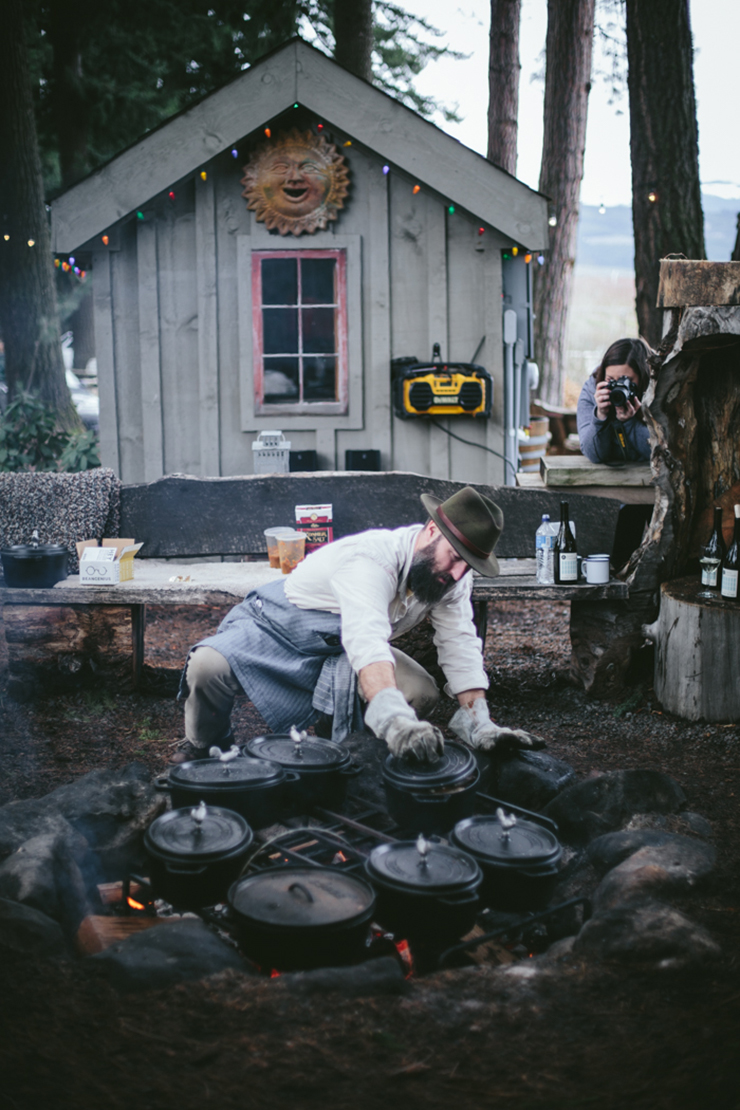 You organize the supper so that it utilizes different spaces within the locations you choose. Does it help with the flow of the supper?

It does help with the flow. Part of the reason why we started doing it that way was because we have had our suppers in such cool locations that we felt the need to showcase and encourage people to mellow around and see the surroundings or the building. It adds a nice flow to the experience. It also encourages people to talk to each other more, and allows you to theme out different rooms if you want. 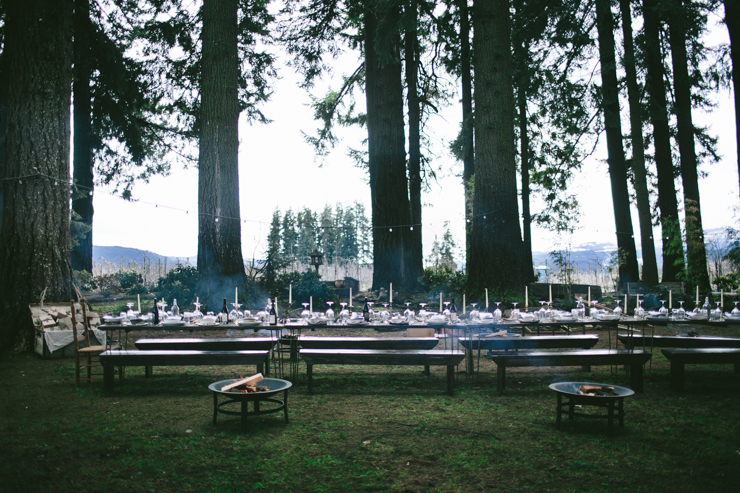 Why Scandinavian food?
We had been wanting to do a Scandinavian-themed supper for a long time. Scandinavian food is very interactive and minimalistic, yet beautiful and show-y at the same time. It also feels like the perfect holiday menu because it’s pretty and simple but festive. So we tried a couple of things that were a lot more interactive for the guests this time around.

For the first course— the salmon soup course—we had the base of the soup and then we poured the liquid around it in front of the guests. For the main course, the chef made this amazing pork roast with burning bundles of sage and herbs underneath that we brought to the tableside smoking and flaming. When we placed it on the table there was this gorgeous smoke popping out. It was very interactive and fun.

"It’s a new way to get people out of the typical restaurant environment, and maybe connecting more (in our case at least) with the food, the people around them, and with the environment, as most of the dinners are held outside."

What else was on the menu?
For the cocktail hour, we had an amazing Aquavit-based cocktail served with a simple high-quality cheese and cured meat, also with pickled beets and cucumbers to keep up with the theme. That was a very simple way to start the dinner. The first seated course was a beetroot tartare with Aquavit cured and grilled salmon. We poured over it a lovely cream based broth which complemented the salmon perfectly. The next course was whole roasted cauliflower with rye berries. It was so aromatic and beautiful.

They were whole-roasted, so we brought out two per table which made it interactive, and made people engage with their neighbors. The main course was a Danish Christmas Roast. This is a pork roast with a beautiful thick layer of crust on the top of it, served with Hasselback potatoes. Both very Scandinavian in their heritage. Finally, the dessert was almond and hazelnut cake with some rose and rhubarb jam, and a very beautiful merengue on top that was flamed tableside as well. 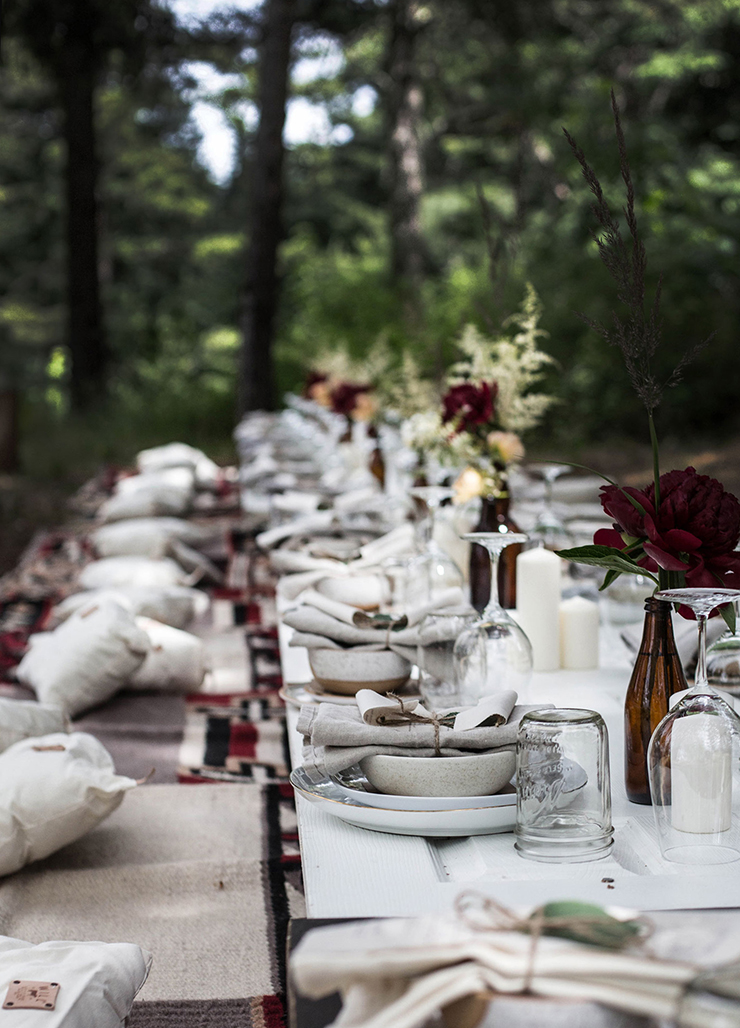 And the alcohol… how was it?
We had a bartender there who did our opening cocktail and our dessert cocktail. The opening cocktail was an Aquavit-based cocktail. It was cinnamon-infused and very winter-like. The next three courses were paired with wines. I come from a sommelier background, so I’m very passionate about the wine that we serve with our food, and believe wine should make your food better and vice-versa. For the salmon soup course, we served a Silvaner and it was just a tad off-dry so that complemented the creaminess of the soup. The cauliflower course had a Vermentino which was funky and fun and fresh. For the main course we served a Morgante. A red wine for that main course was amazing. The flavors complemented the pork beautifully. And for the dessert we had a mulled wine. It was lovely with the cake.

How far in advance do you plan the menu?
We start planning the menu probably two months ahead of time. Theme-wise, we start planning the supper anywhere from six months plus, depending on what the theme is and where we want to do it. For the menu, we have ideas three months out but finalizing and thinking about it is probably two months out. It takes a long time and is very lovingly thought-out.

Is there any science behind creating the guest list?
Not really. Thankfully we have had such an amazing mix of people at our suppers. We advertise mainly through Instagram, so we have followers from around the world. From young to old, we have had people coming from the Northwest, from elsewhere in the United States, and we’ve even had guests flying from overseas for a supper and then making a whole vacation out of it. 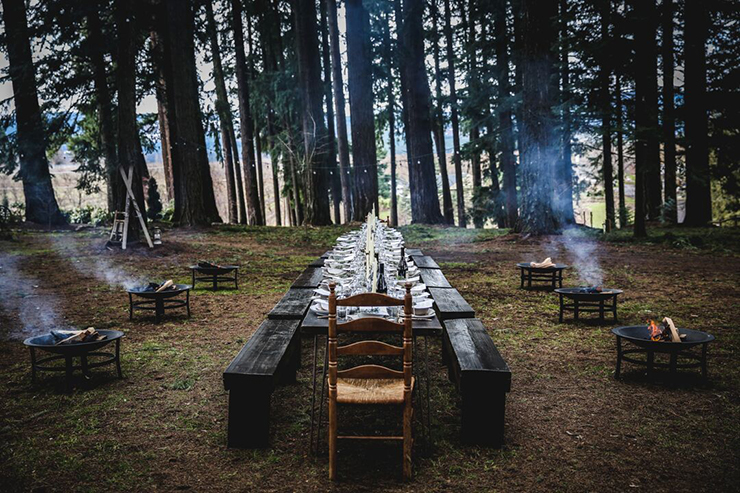 What are the criteria involved in choosing the location?
Once we have the theme figured out and we know what we want to do, we narrow down the realm of locations. Here in Washington and Oregon the scenery is beautiful, and we have a variety of settings from beaches to mountains. Our locations can be anywhere, from public places out on the beach to private residences that we either see and think would be great or that are offered to us.

We are getting lucky now that people are contacting us sometimes and offering their properties. Fortunately, we have stumbled upon beautiful and breathtaking spots after a lot of exhaustive researching. That’s the really fun part about it: finding that show-stopping location.

Click through the slideshow below for more holiday
dinner party inspiration from the Secret Supper Club:

This is the new room service 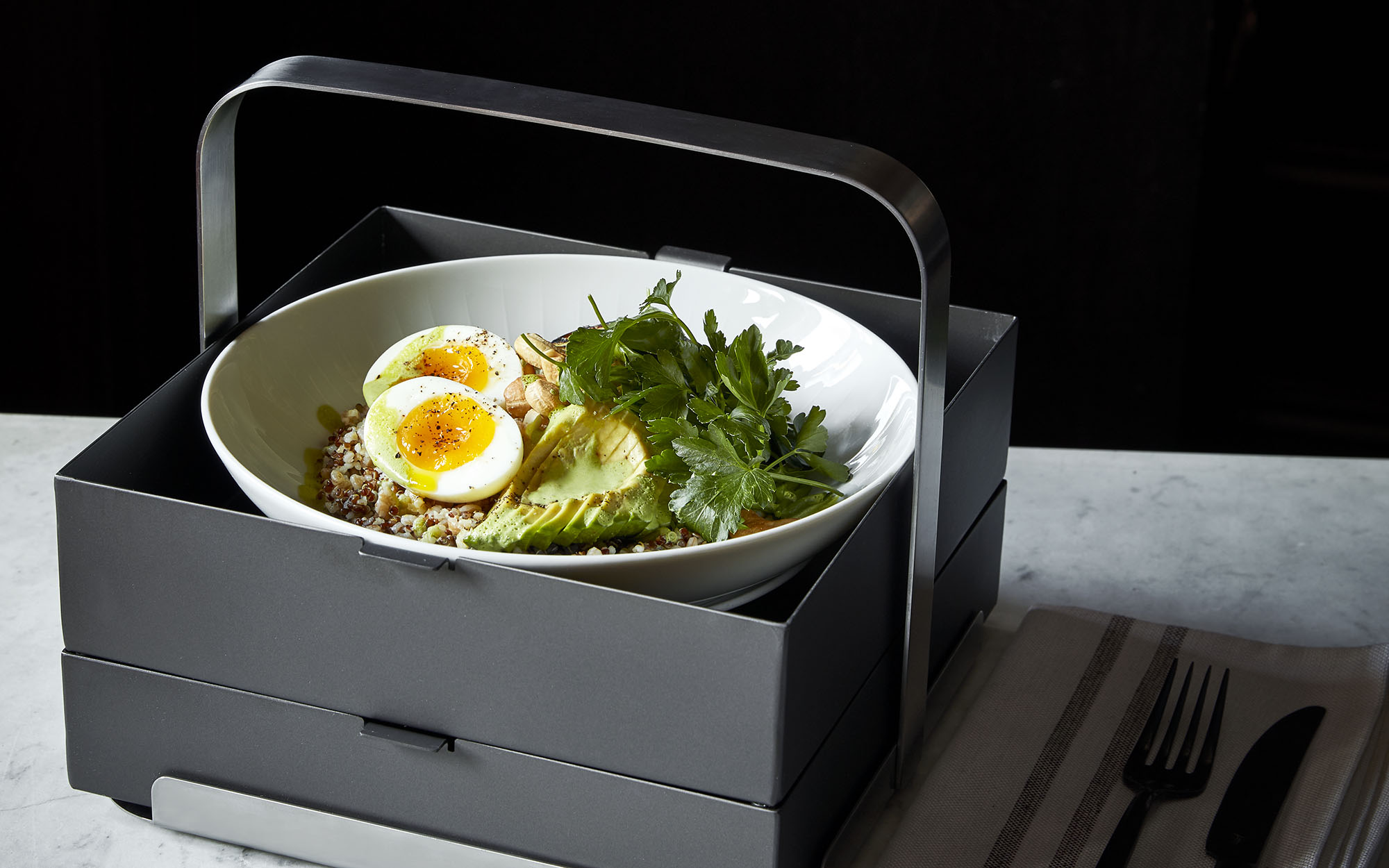 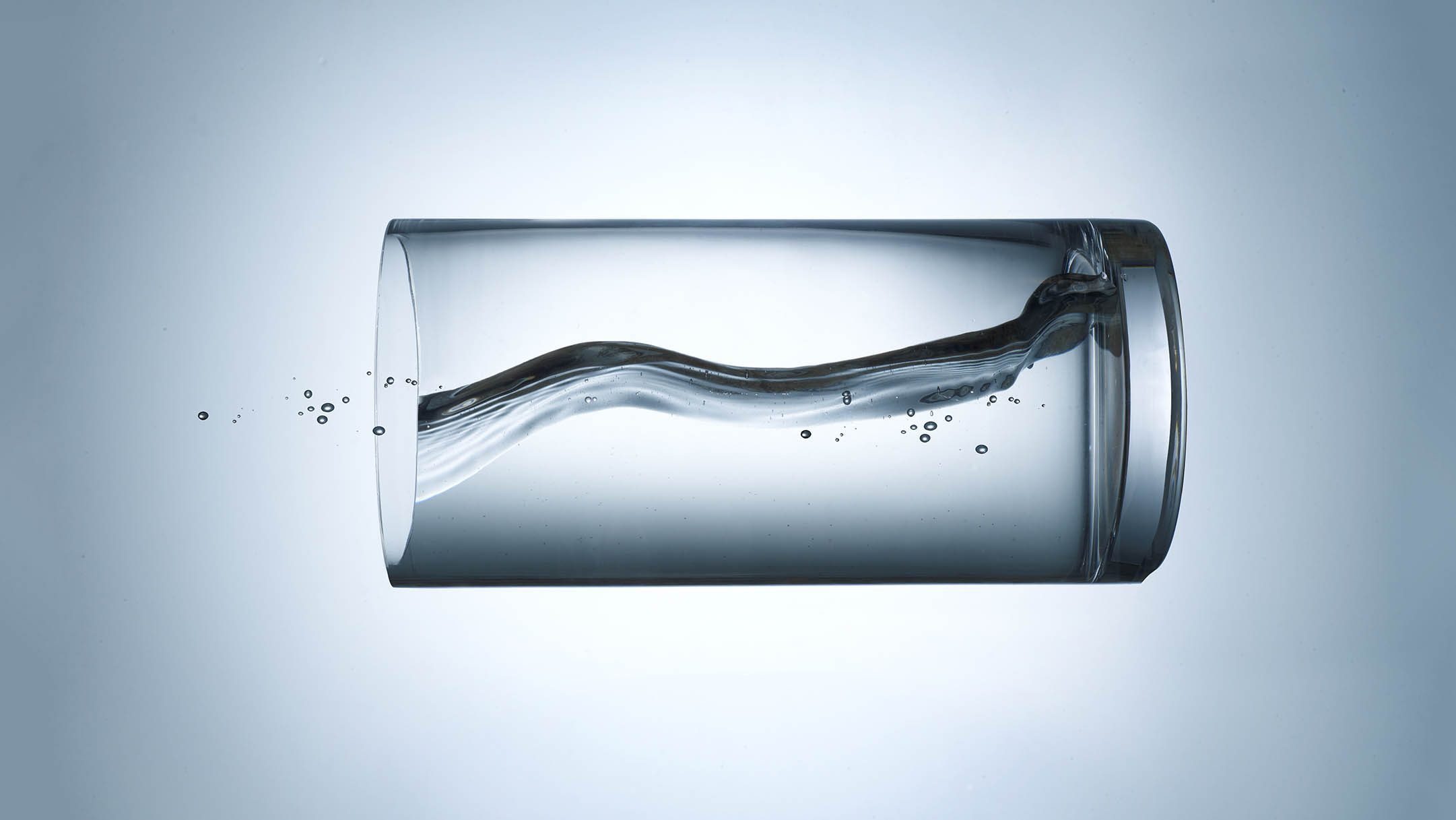 “Remember to savor, talk about, and appreciate flavor.” - Bethany Snodgrass 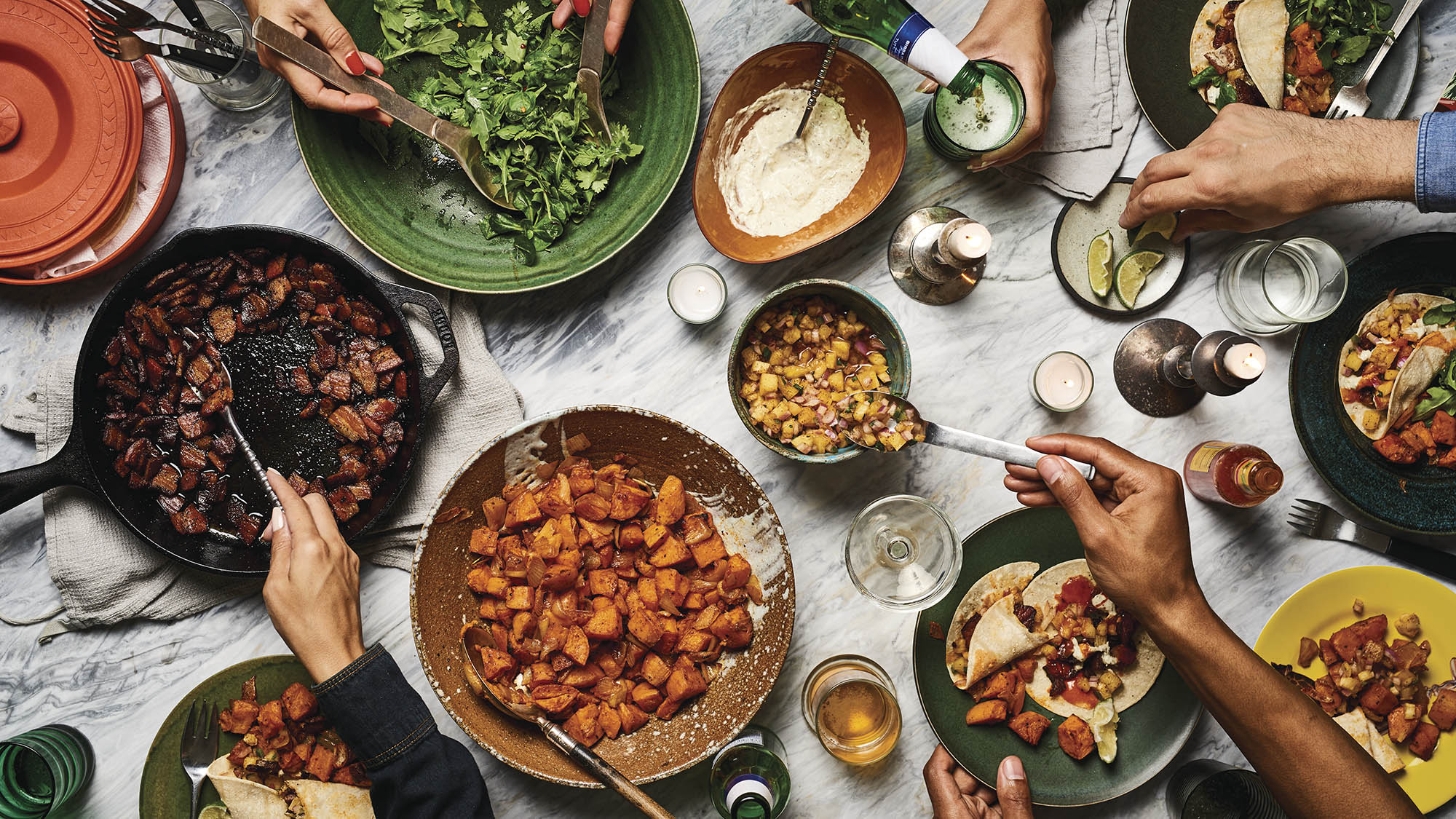