The push-ups you should be doing

There’s a reason push-ups have stood the test of time: They work. “It’s a multi-joint exercise that targets your pecs, triceps, deltoids, and all of your key muscle stabilizers,” says Lucas Varella, a Tier X coach in Century City, California. (It's also one of the best ab exercises.) “Plus, it doesn’t require any equipment, so you can perform push-ups anytime, anywhere.”

The only catch is that in order to see results (and avoid injury), you have to stick to the workout plan and do them correctly: Keep your head, neck and spine in a neutral position, your abs engaged and your lower body muscles (hips, glutes, etc.) activated throughout the movement.

How it works: Perform one traditional push-up using good form. Work your way up to 3 sets of 8. Once you can complete those best exercises without faltering, you’re ready to move on to these variations. “Mixing up your hand positioning and body movements will challenge different muscles, burn more calories and test your endurance,” says Varella. Tackle one of these exercises at a time. Do 2 or 3 sets of 8 to 10 reps, using proper form, and then move on to the next one.

Start in a high plank. Keeping upper body engaged, lower right forearm to floor, placing elbow under shoulder, then lower left forearm to floor. Hold plank for one count, and then rise back up to start, placing one palm on floor at a time.

Perform a push-up, keeping elbows by sides. Extend right arm in front of you and left leg behind you; hold balance for one count, then lower. Do another push-up, and repeat balance on other side (left arm; right leg). Repeat.

Start in a high plank, gripping a kettlebell in each hand, with palms facing each other. (Note: The bigger the kettlebell, the more stable you will feel.) Bend elbows behind you, keeping them close to sides, lowering chest toward floor, and then press back up. Once up, pull left elbow behind you, bringing kettlebell up to ribs; lower. Repeat push-up and perform row on the opposite (right) side. Continue alternating sides with each rep.

Start in a high plank with left hand on top of the bell of a kettlebell resting on its side. Without rotating your torso, keeping hips and shoulders square, bend elbows behind you, lowering chest toward floor, and press back up. Do 8 reps; switch sides and repeat.

Start in a high plank. Lower chest toward floor, and then as you press back up, rotate torso to left and keep gaze on your left hand, as you lift your left arm and leg toward the ceiling, forming an X with your body. Hold for one count; rotate back to high plank and repeat.

Start in a high plank with a towel under your left palm. Slowly slide left hand forward, as you bend right elbow behind you and lower chest toward floor. Without falling flat, extend left arm as far forward as possible, and then slowly slide back up to start, keeping arm straight throughout. Do 8 reps; switch sides and repeat.

Start in a high plank with tops of feet centered on a stability ball. Bring right knee in toward chest, then rotate torso slightly as you extend leg out, parallel to the ground. Perform a push-up, keeping body squared up as much as possible. Reverse motion back to start. Repeat on left side. Continue alternating sides with each rep.

Start in a high plank. Perform a push-up, and then step right leg under and to the left of your left leg and right hand under and to the side of left hand. Step left hand and leg over the right, moving back into high plank. Perform a push-up, and then reverse motion (left hand/leg steps over right; right goes under left) back to the right, ending where you started.

Start in a pike position (upside down “V”), with palms under shoulders, toes centered on top of a stability ball, legs together, hips raised toward ceiling. Keeping lower body still, bend elbows behind you, slowly lowering head toward floor; carefully press back up to start. 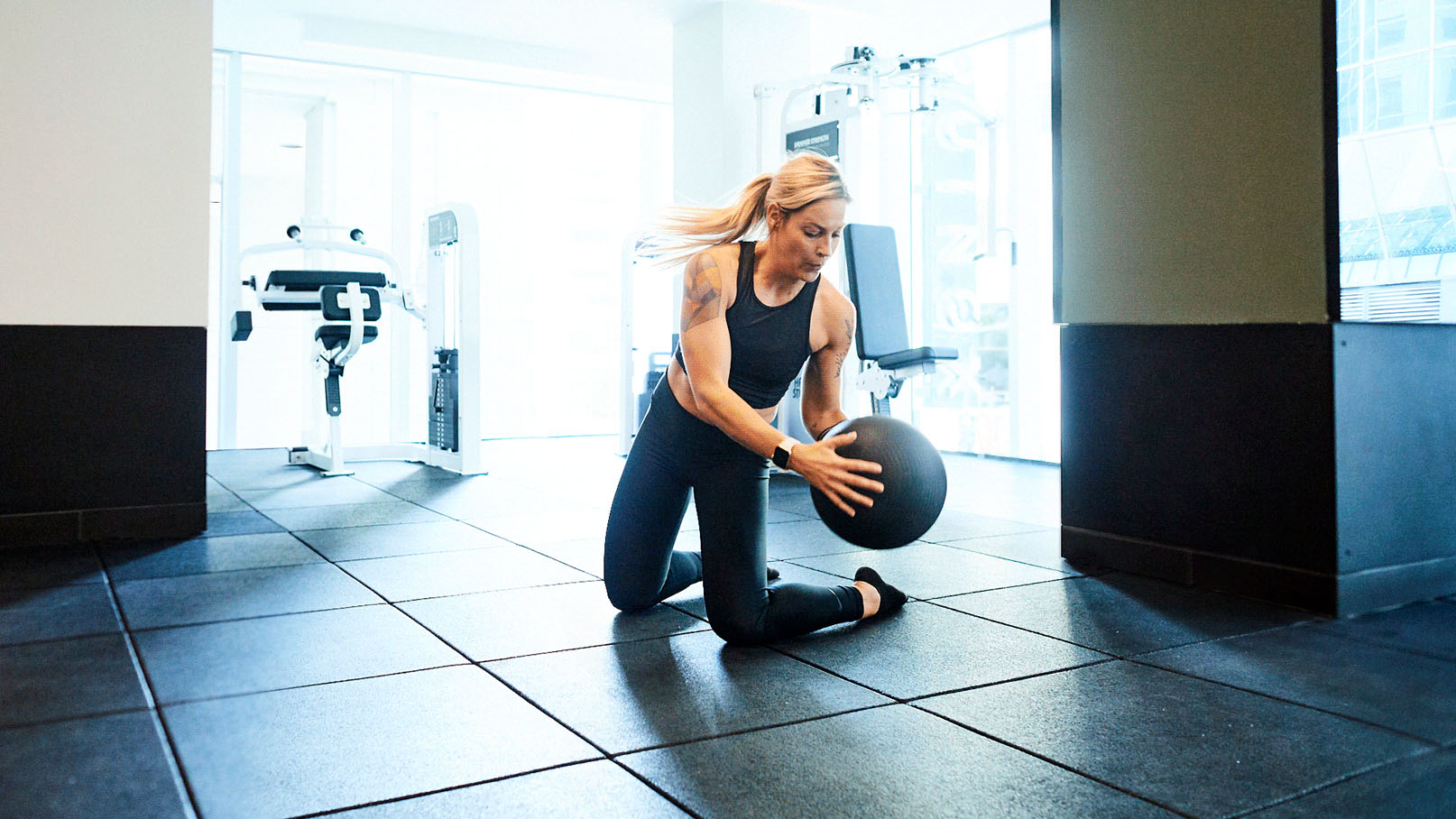 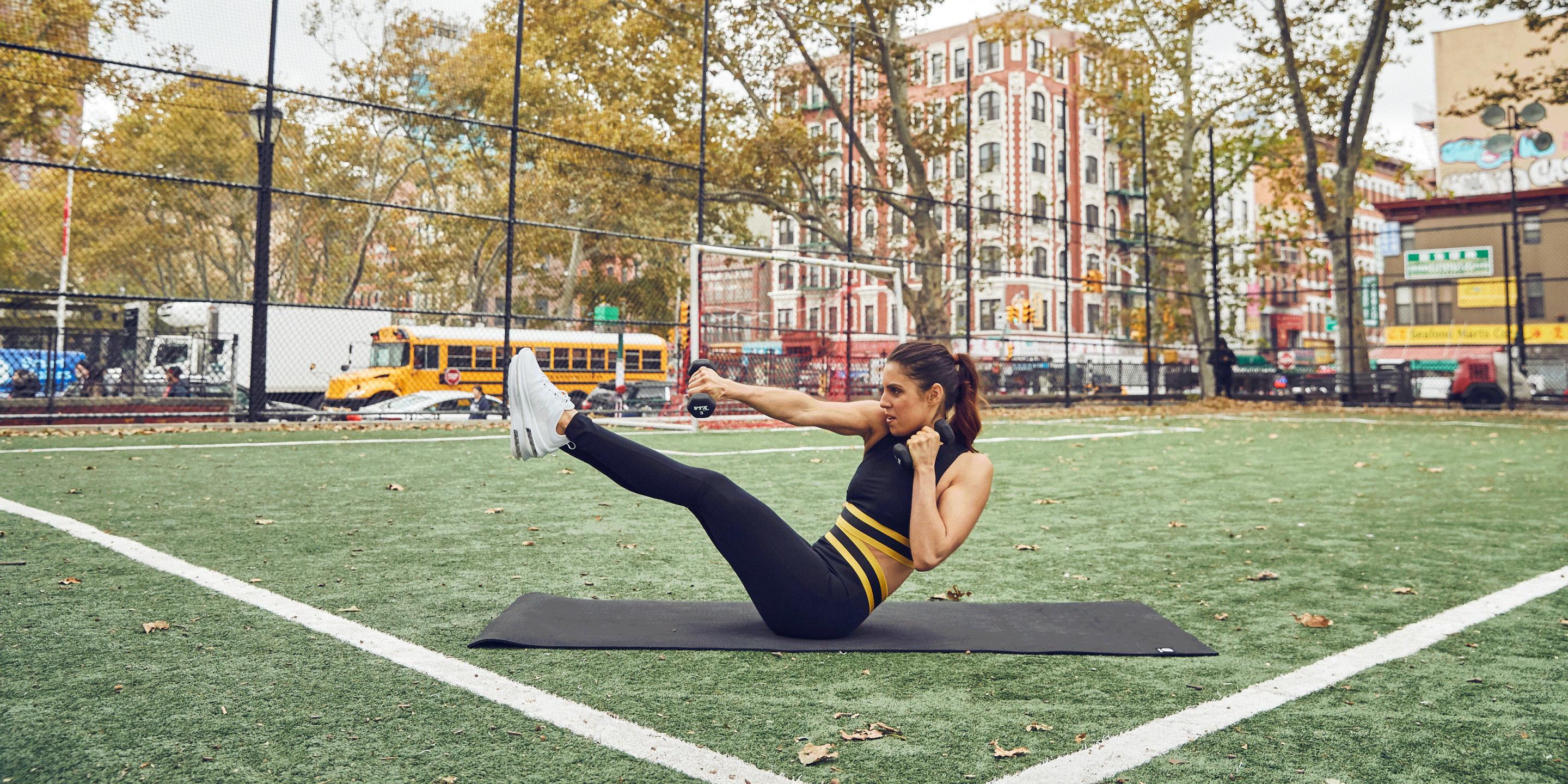 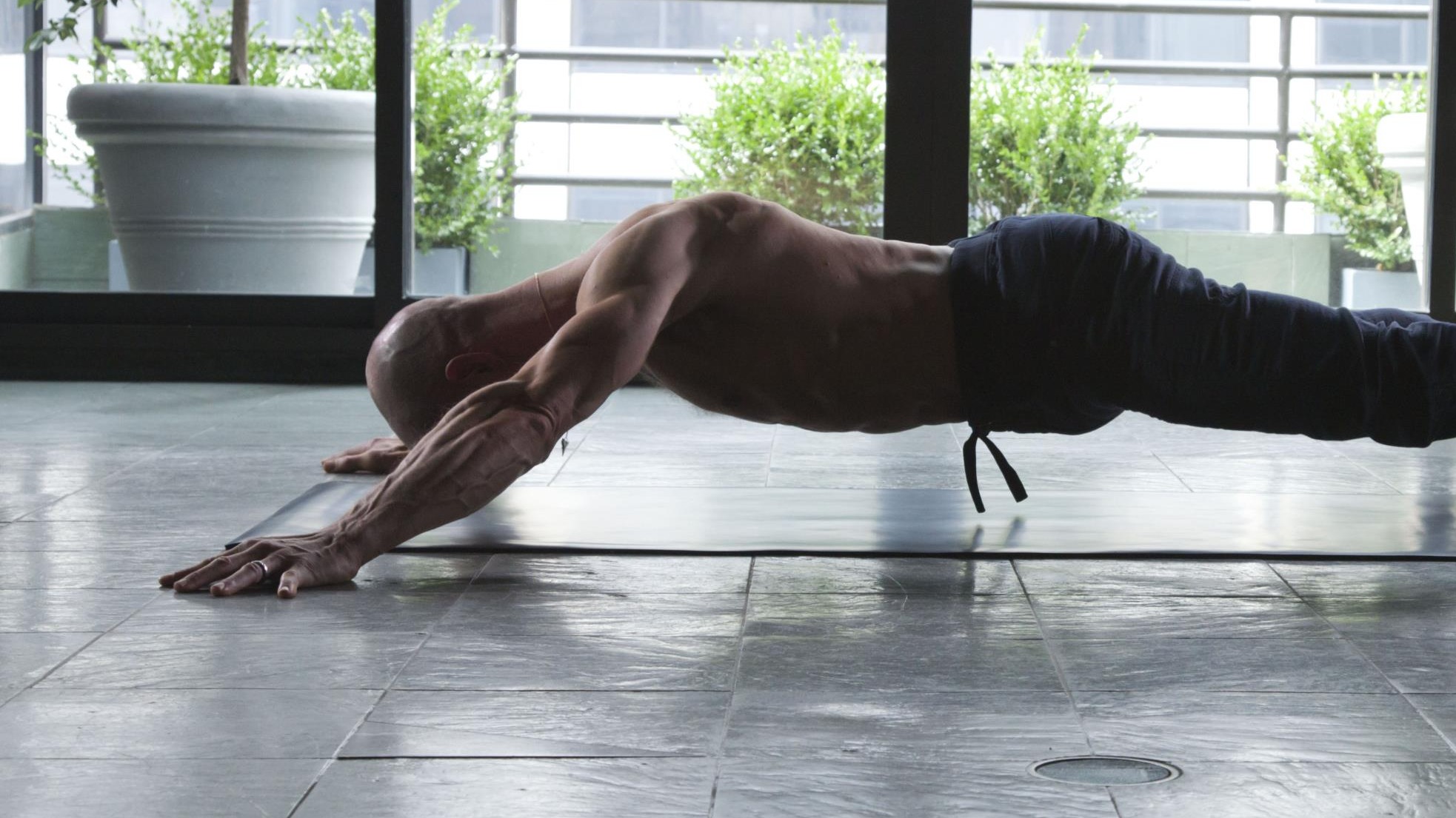